The birches vanish progressively
as the plastic is pinned to the inside of the studwork
nominal walls til now,
skeletal rectangles allowing light and wind.

as they pluck insects from the new hatch
while  swallows wheel in the higher air.
I wait in the doorless portal
knowing evening warmth and calm
and the busiest time of opportunity,
the cattle grazing as if at harvest.
The hills are softened in vapour
and mottled with shade
from cloud teased by distant winds
blowing seagulls in from the east.
Young lambs on the hill
demand to suck:
their calls enter the new room
claiming it. 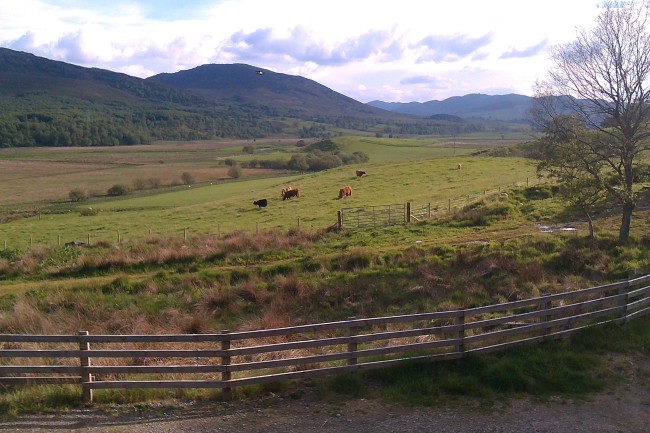 I have two days to renew my electricity contract.
If not my friendly supplier will continue to supply me-
at five times the cost.
A pine marten would, I suppose,
display no less rank predatory opportunism
among my hens.
As I complete the task I notice Holly
lying alone: atypical behaviour triggering a latent alarm.
She watched me head-up this morning as I rode the quad to the yard.
She was watching still at my return.
I put it down to a quest for morning feed,
now discontinued.
I kick myself for ignoring a possible signal-
where is her beautiful white heifer calf?
When animals suffer
or die
any stockman takes it on themselves.
Ishouldhavebeentheregotupearlierinthedawnseenthesignals.
Two months ago I saved Demi-Og’s baby by the merest chance,
a matter of seconds,
sometimes I fail.
Season before last Holly’s calf died
for no reason.
I saw her first thing,
by lunch she had stretched out
and expired as I pumelled and exhorted
in the exact same damp spot that April’s newborn had passed
a month earlier.
I will never permit an animal to calve there again-
just in case they are called to follow..

Dear Holly – not again-
I run from the office, coat and boots collected,
run to the field-
please No!

The calf, big and white, is easily spotted over the brow,
picking at tufts on the ledges of the rabbit warren.
Relieved, I tickle Holly as she lies in the grass.
Angus Halfhorn, as fickle as any harem master should be,
has forgotten yesterday’s dalliance with Moira:
Demi Og is today’s sweetheart. 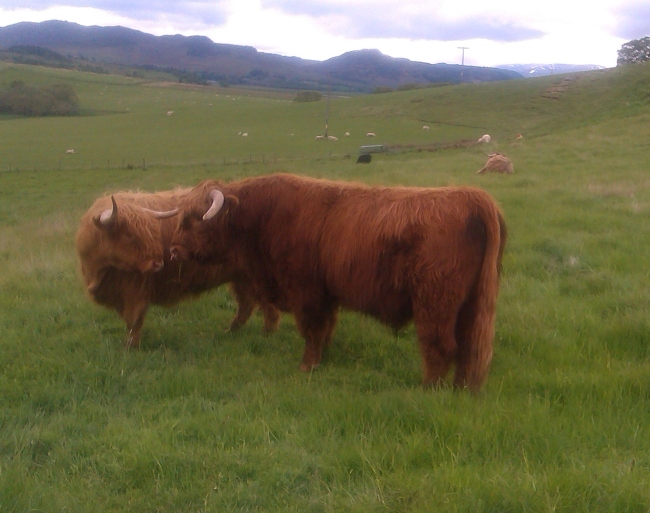 I tag the last calf this morning –
old white Moira’s bull calf,
her last
and Billy’s.
I coral him in a tight pen at the entrance to the race.
It confines him nicely, but the hurdle closing the entrance has no chain
to close it: being strong  he could force it open by charging the bars
the way they do when frightened,
while I seek a tie.
I use my trousers,
restoring my dignity once the lad is released.

Logging the birth online,
filling Billy’s tag number as sire
for the last time
I see the animals in the field below the window
alert to something in the wood.
From the balcony I spot Moira being harrassed by the bullocks,
circling to escape their attempts to mount her.
She has come into season-
the first time after George’s birth.
She could be injured by these crude suitors,
incapable but only too willing.
I run down, divide them and shepherd her and George through the gate.
The boys watch her forlornly as they amble toward the other animals
She and her halfcalf are once more part of the herd-
and Angus Halfhorn is waiting. 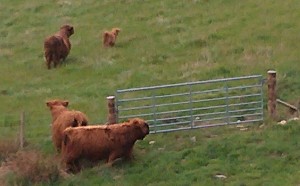 Come back!- we didn’t mean it.

The void between the buildings is spanned by an oaken bridge.
The bunkhouse sits below the roundhouse so that the bridge leaves the roundhouse deck to strike the first floor at the other end,
10 foot off the ground,
and level with the bunkhouse eaves where the swallows dart.
I make the crossing to my office at the westen end of the bunkhouse
The prevailing westerlies hit the gable end of the office to curl round the mouth of the bridge and down its length.
Swallows make their homes here, housemartens adopt the round walls of my home.
This natural specificity is dictated by the respective build systems; mud and grass for materials –
but while swallows prop their nests on a ledge – maybe a downpipe elbow-
martens bracket their nests to a vertical.
They need purchase – choosing the dry head of my rough lime rendered wall.

out onto the bridge and across to the wide platform
overlooking the bright growth of upper Strathspey.
A swallow brushes past my shoulder using the air as I use the timber deck.
The wind is strong enough for the birds to hold themselves up,
feathers fluttering, with a litany of chirrups and washboard clicks.
There must be a couple of dozen surrounding me,
within inches of my head,
like butterflies
or blessings.

A muted complaint alerts me to a mallard couple
splootering contentedly in the roadside ditch;
they watch cautiously as the Nog and I pass.
Higher up the hill roe deer twins
delicate and angular
are not so sanguine, ears pricked intently
as the Nog settles on the crag while I descend.
I keep his attention until calling him down to
chase me beyond the fence,
freeing the calves to bound back to shelter.
A curlew slides past, as if following an invisible aerial contour
and settles ahead of us yammering its liquid call:
challenging by serenade.

Returned to the farm, I can find no threat:
George, deprived of milk and too small for the trough, is watered,
and noses the Nog without concern.
The cattle are at the new grass,
and the housemartens dart among the eaves.

Billy’s last journey is simple to trace.
Not for him quiet retirement under the trees.
He has his place – as master.
First he must cross the field.
He sets his head against the closed gate, hooking his horns under the bottom bar.
The metal buckles but the ropes hold and the hinges are strapped down.
No matter- he knows all the ways round the farm that he has owned contentedly for a decade.
He sashays along the fence seeking access to the wooded hollow.
This gate too is tied: a rope looped round a securely braced corner post.
He brings his horns down on the timber bars of the short ladder at the side, smashing them from the post.
The gap is too small for him to pass through.
His way lies through the marsh.
The wired gate swings open under his weight.
He moves purposefully through the bog created by the blocked drainage channel.
His wide hooves carry his body weight squarely punching pockets in the soft ground that fill at once with water.
Where the land dries again, he skirts the fence bordering the vacant hay pasture.
The gate bulges and gives.
He is now on sweet new grass but his mind is not on grazing.
At last he reaches the paddock with the high fence where his females wander in the company of his son.
Angus stands there, responding to his challenge.
Billy tears at the grass with his front hooves, revealing black dirt that he grinds to paste with the front ridge of his skull, snorting and groaning as he does so.
He lifts his head to the sky.
At his trumpeting, rivals will quail, trees split, the earth will shake and walls tumble.
Mastery is his-
just one more gate.
He is ready
to break through.

Close to a week ago now I heard a great bellow
as I ladled feed
one wet morning.
Flora, my best cow with a great spread of horns and hanging belly
has calved with no trouble
The baby is tall
so cannot find the swollen teats her mother proffers
like munitions.
I bring them in
avoiding Flora’s flailing horns clanging against the metal,
milk her and feed the baby:
2 litres of yellow firstmilk-
she will not sleep hungry in the open field.
Flatflanked next night she takes another bottle
but is not done-
sucking against the metal my arm waterproofs.
staggers into the yard
milk mad berserker
If a pack of wild dogs stood in the way
of milk
she would challenge for leadership.
I guide her to Flora in the crate
breaking the year’s seal on each tit in turn

before offering it over my forearm 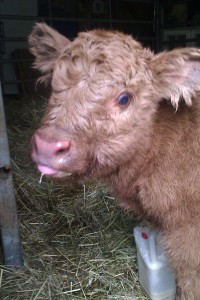 This one will do, I think,
looking round at the winter deep muck
greening with algae,
as she pulls the swollen cone
to a flaccid hanging scrap.
This will do.