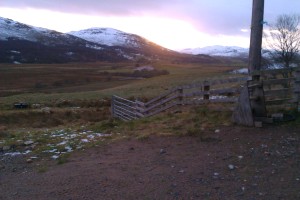 Well – not all bad

So grey today. Snow melted and new rain from !ow cloud. So fitting then to wean calves – overdue O yes I know you judgmental tutelary farming deities. Old Billy was slow to service last year on account of his weakening hindlegs so the calves came late: March to June not January \February. So the painful separation of mothers from young normally happens in September: all sorted before winter regimes kick in.

Well, not this time.

Single handed I work with the animals, persuading them that what I want is what they want. Holly follows the feedbag accompanied by her outstanding white daughter; Angus had been sidelined with a private pile of nuts, Alice is held at the yard.

Farm operations involve committing to a plan and then working to extend it as it happens: a mixture of planning, opportunism and blind faith

This time the young heifers find their place with the female yearlings: and the mothers of the bull calves- too complicated to explain- but both girls and boys are now sad and weaned

At the yard mother Alice rubs her neck on the gate as if to open it by sheer persistence, or seeking the magic word, equivalent to ‘Open Sesame’

It’ll have to do

-its a rainy December day after all! 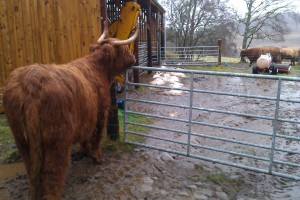 I know it’ll open if I keep rubbing it!